Subversive action against the Jewish people by Zeev Sternhell 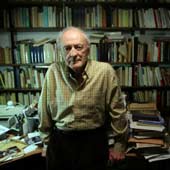 How will the Jews of the world react once it becomes clear to them that Israel is on a collision course with their very existential interests?
By Zeev Sternhell | Jul. 4, 2013 | 2:23 PM |

Since the French Revolution, the fate of the Jews has always been dependent on the fate of liberal values and has always reflected the ups and downs of those values. Wherever human rights have collapsed, the fate of the Jews has also been sealed. Prior to the mid-20th century, the Jews were dependent on political and cultural developments unfolding in other nations; since the establishment of their own state in 1948, the Jews of Israel determine their own fate. Thus, one should be particularly interested by the process in which the state where the Jews are the sole masters is gradually becoming the standard-bearer of the denial of human rights in the Western world.

Granted, the Israeli right believes that the concept of human rights, which can be defined as the individual’s right to autonomy, liberty and equality and is the pillar of the liberal perception of the individual and society, is nothing but a gun pointed at the Jewish state. Thus the Israeli right is convinced that Israel’s very existence is threatened by the struggle for the concept of citizenship as the foundation for moral, political and judicial equality for all those living within the state’s borders.

It should be pointed out here that the struggle for human rights also emphasizes the idea that the state is the instrument by which the individual ensures his or her interests, rather than those of an entire ethnic community.

From the perspective of the extreme nationalists of various hues, this approach nullifies the dominant status of ethnic and religious affiliation, and therefore the fundamental liberal values that are prevalent in the Western world become the enemies of Jewish nationalism. In their perception, these values threaten the very survival of the Jewish people.

Admittedly, in the current Israeli reality, the principle of human rights is viewed primarily as a shield for protecting Arabs and as a factor that weakens the state’s position in its relationship with this large minority group and with the population of the territories, which conducts its life under a colonial regime. Moreover, the destructive, anti-democratic legislation that is presently in various stages of consolidation has a two-fold role: to ensure the dominion of the Jews over all other groups in the country and to severely limit the protection accorded to all the state’s citizens.

Behind the facade of “governability,” a two-stage process that is preparing the ground for an apartheid state is developing. What is particularly disturbing is the fact that the creation of a situation of ideological and judicial inequality in Israeli society is taking place without any direct connection to the territories. Thus, it is highly possible that Israel’s withdrawal from the territories and the establishment of a Palestinian state will not curb these tendencies, but will actually reinforce Israel’s persecution complex and its aspiration to isolationism as well as speeding up the erosion of civil liberties.

Thanks to this process, Israel has embarked on a path that will gradually sever its ties with American and European Jewry and with the international community. The Jews of the world – whatever their situation in their particular country of residence – enjoy human rights, which are individual rights accorded to all citizens and constitute the only genuine basis enabling Jews to live in those countries. Diaspora Jews do not have collective rights – of either a religious or a national character – and the sole protection of Diaspora Jews rests in the faithful application of liberal and democratic rights in the society where they live.

How will the Jews of the world react once it becomes clear to them beyond any shadow of a doubt that Israel is on a collision course with their very existential interests? The various expressions of fanaticism in Israel, such as the exclusion of women in the military and, in a short while, in institutions of higher learning; the denial of equal rights to its non-Jewish citizens and the division of the population according to ethnic origin can all ultimately be considered as subversive actions undermining the status of Diaspora Jews in their various countries of residence.

The truth is that one is already beginning to hear these voices on university campuses in Europe and the United States: The defense of Israel is becoming a burden and the situation of pro-Israel students and professors is becoming more and more difficult. Israel has evolved from the favored child of the international community to one of the world’s most hated nations. This process is not something that has accidentally occurred nor has it taken place overnight. The way things look today, the situation will only get worse with the passage of time.
http://www.haaretz.com/opinion/.premium-1.533790

LherKVaHW2HtVnNqQFWLPEb1BZOjPYL9K1/JPLO_Declaration-v4.2.3-v2.doc
the books
Sabra and Shatila (1984) 2009
http://bookstore.authorhouse.com/Products/SKU-000255066/Sabra-and-Shatila.aspx
The End of Zionism : and the liberation of the Jewish People, 1989