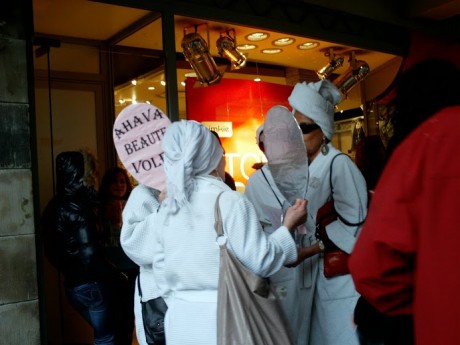 Boycott activists celebrate as Ahava quits South Africa An Israeli cosmetics company based in an illegal settlement in the occupied West Bank has been forced out of South Africa after a sustained boycott campaign. http://electronicintifada.net/blogs/asa-winstanley/boycott-activists-celebrate-ahava-quits-south-africa Archives http://la-feuille-de-chou.fr/archives/7838

The following open letter was issued on August 12 to oral historians and scholars planning to participate in the June 2014 International Conference on Oral History at the Hebrew University of Jerusalem. The letter is signed by over 200 scholars and community oral historians and counting; and is endorsed by Academic and Cultural Boycott Campaigns, […]

Now is the time for a military embargo on Israel!

Now is the time for a military embargo on Israel! “For to be free is not merely to cast off one’s chains, but to live in a way that respects and enhances the freedom of others.” –Nelson Mandela Horrified at the latest round of Israeli aggression against the 1.5 million Palestinians in the besieged and […]