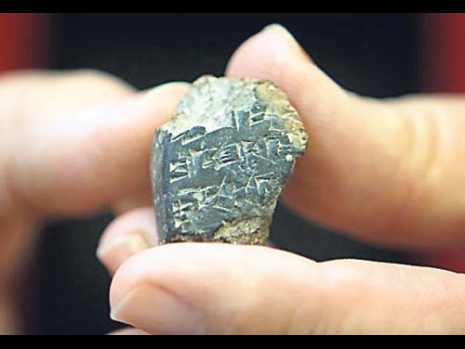 Petition slams Tel Aviv University’s involvement in East Jerusalem dig
| Ha’aretz | 25.12.12 : “We’re already getting cancellations of
conference participation and this is playing straight into the hands
of the BDS movement.”

Petition slams Tel Aviv University’s involvement in East Jerusalem dig
Over 80 academics call on university administration to withdraw its
participation in archaeological excavations in the City of David national park, operated by the pro-settlement NGO Elad.
By Nir Hasson | Dec.25, 2012

Tel Aviv University administrators on Monday received a petition signed by dozens of senior academics from Israel and abroad calling on the university to withdraw its participation in archaeological excavations in East Jerusalem’s City of David. The national park is indirectly financed by the right-wing NGO Elad, which administers the national park.

Last week, the university’s Institute of Archaeology started digging in the City of David national park, but it was temporarily halted due to the rain and is expected to resume within the next few days.

In October, Haaretz revealed that the university and the Israel Antiquities Authority had signed a contract under which the authority would finance the excavations in the lower part of the national park to be carried out by Tel Aviv University researcher Dr. Yuval Gadot.
As with other IAA excavations in the City of David, this one will also be financed by Elad, even though it is not a signatory to the contract.

“Digging in the area is carried out under heavy guard by the Border Patrol and a private security company, a fact that only adds to the friction with village residents,” the petition states. “Under discussion here is a partnership with an extreme political organization and thus a de facto stance on a very contentious issue, both politically and morally. The university is thereby giving the NGO
the professional recognition it desires, which academic institutions in Israel and abroad have so far refused to grant.”

The petition’s organizers expressed their concern that the dig would
strengthen those who support a boycott against Israeli academics. “Tel
Aviv University would be causing immeasurable damage to academia in
general and to our desperate efforts to steer clear of the boycott,
divestment and sanctions movement against Israel in particular,” said
Prof. Sidra Ezrahi. “We’re already getting cancellations of conference
participation and this is playing straight into the hands of the BDS
The petition’s organizers said that positive responseswere widespread
among senior figures usually identified as supporters of Israel. So
far, 87 academics have signed the petition, including historian Prof.
Natalie Davies, gender researcher Prof. Joan Wallach Scott, and Prof.
Susannah Heschel, a Jewish studies scholar and the daughter of Rabbi
Abraham Joshua Heschel.

Tel Aviv University responded that the “area designated for the excavation is located far from the houses of Silwan. The dig will be carried out using modern scientific methods, at the highest professional standards, with particular attention paid to professional ethics. In the dig, a great deal of attention will be paid to the needs of those living nearby and the dig will be open to visits by
local residents and tourists.

Other than cooperation and professional oversight by the Israel Antiquities Authority, as required by law, no directives from any other organization will be accepted and there will be no supervision by any other group of the Tel Aviv University excavation.”

“Elad welcomes any organization interested in exposing the history of ancient Jerusalem and enriching research and scholarship on the topic. The City of David is a national and global heritage site of the highest order, as stated by Supreme Court Justice Edna Arbel: ‘The City of David tel relates the story of Jerusalem over thousands of years, as one may infer from the study of the Hebrew Bible.  Theimportance of revealing the secrets of the City of David is both national and international.’”