How Israel Gets Away With Torturing Palestinians to Death 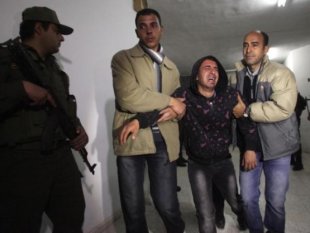 In a decade, 700 Palestinians lodged complaints of torture. Not a single one has been criminally investigated.

Arafat Jaradat was tortured to death in an Israeli prison. (AFP)
February 25, 2013 – Six days after Arafat Jaradat was arrested by the Israeli army and the Shin Bet, he was dead. Between the date of his arrest – February 18 – and the day of his death – February 23 – his lawyer Kamil Sabbagh met with Arafat only once: in front of a military judge at the Shin Bet’s Kishon interrogation facility. Sabbagh reported that when he saw Jaradat, the man was terrified. Arafat told his lawyer that he was in acute pain from being beaten and forced to sit in stress positions with his hands bound behind his back.

When it announced his death, Israeli Prison Service claimed Arafat – who leaves a pregnant widow and two children – died from cardiac arrest. However, the subsequent autopsy found no blood clot in his heart. In fact, the autopsy concluded that Arafat, who turned 30 this year, was in fine cardiovascular health.