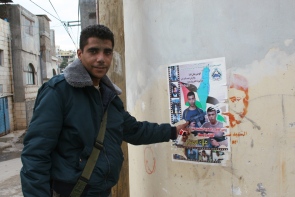 Support Anarchists Against The Wall!

Urgent- Please Support AATW Support Anarchists Against the Wall: In the past two years, AATW has been subject to a growing wave of assaults on anti-occupation activists in Israel and in the West Bank, combined with delegitimisation and persecution. One of the main means of persecution we are facing is the legal threat. In the […]

http://youtu.be/2_LIfs__jHE Some people wonder why we put ourselves on boats and sail across the Mediterranean to Gaza. We face one of the most vicious armies in the world, armed with only our determination. On this, the second anniversary of Israel’s brutal assault on Gaza when 1400 Palestinians were killed, we want you to know you […]

PCHR Palestinian Centre for Human Rights Ref: 13/2010 Date: 08 March 2010 Time: 08:00GMT On the 8th of March, Efforts Should be United to End Palestinian Women’s Suffering The 8th of March marks the International Women’s Day, which was adopted by the UN General Assembly in 1977 to support women’s struggle for their rights that […]